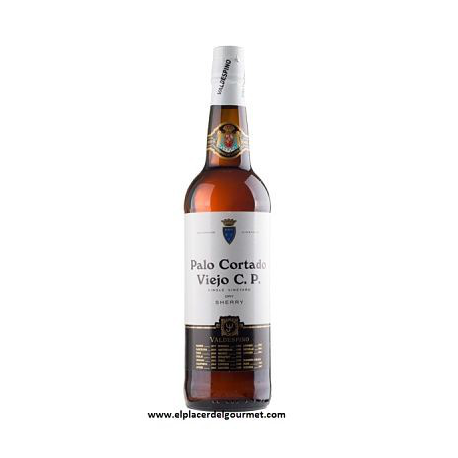 DO. Jerez-Xeres-Sherry wine PALO VIEJO CORTADO CP VALDESPINO 75CL
Old CP means Old Street Ponce, a reference to the street that housed a winery that was acquired by Valdespino in the 1960s However the winery had fallen into serious disrepair and Valdespino moved all its barrels to a modern facility on the outskirts Jerez, in the 2000s.

Unlike most other clubs cut, creating it is well documented. They select the most delicate barrels from the hatcheries ninth (the second stage) of its Inocente Fino and Amontillado Tio Diego screeds and strengthen this mixture to about 18 ° to stop / prevent further growth of flower. Then enter the Old CP system, with a solera and criaderas four, where the oxidative aging process will be completed and will soon become Fino / Amontillado Palo Cortado.