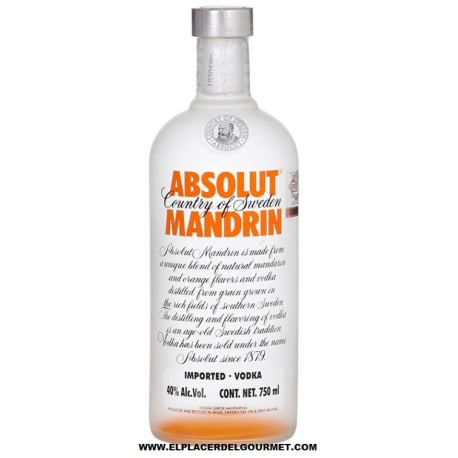 Absolut Mandrin's principal ingredients are Absolut Vodka and flavor to orange, mandarin and citrus fruits. Absolut Vodka is done of water and winter wheat. The water comes from a deep well of Åhus, protected against the impurities. The winter wheat also is harvested in Åhus and differs from other cultures in which it is sowed in autumn and is gathered in the following year. Meanwhile it(he,she) is growing under the Swedish snow developing a hard grain. In addition, the use of fertilizers diminishes to the minimum. In spite of the fact that the mandarin and the orange are the principal flavors, other citrus fruits are added to give his perfect character to Absolut Mandrin.
Absolut Mandrin is done exclusively from natural ingredients, and unlike the majority of other vodkas of flavors, does not contain added sugar. It(he) is complex, soft and mature(ripe) with flavor to mandarin and the character of the orange mixed with a touch of the rind of orange.