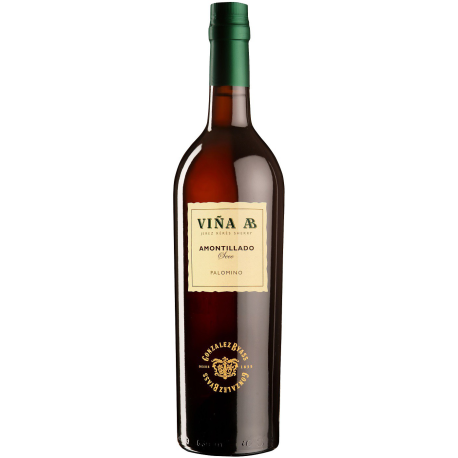 The Spanish means vineyard Vineyard and AB refers to Andrés Botaina, the original owner of the vineyard the grapes. This vineyard was one of the first taken by Manuel Gonzalez after starting the wineries in 1840. He says that Lustau Amontillado Botaina also has a call, a diferent vineyard.

That's not very old for a amontillado. In fact it used to be labeled Amontillado Fino, indicating that it was a transitional style, but from 2009, this name could not be used anymore and simply was named Amontillado (while age remains the same) .In addition to being quite young, who is also on the light side: contains only 16.5% alcohol, which is not enriched again after losing his flower.

Palate: Very little sweet, of course, but lacks the austerity that sometimes comes with dry amontillado. Very light with some flavors that really stand out. Orange peel. Almonds. medium acidity. Some half-sweet notes in the background (think figs and citrus). Also a point of weak bitterness of chestnuts.

Fino relatively close in the sense that shows the calcium / yeasty and spicy notes similar salinity. Maybe a little more delicate time, with lots of round notes as well: some candy and dried apricot. Hazelnuts and almonds. Notes of honey, old polished wood and subtle oak.