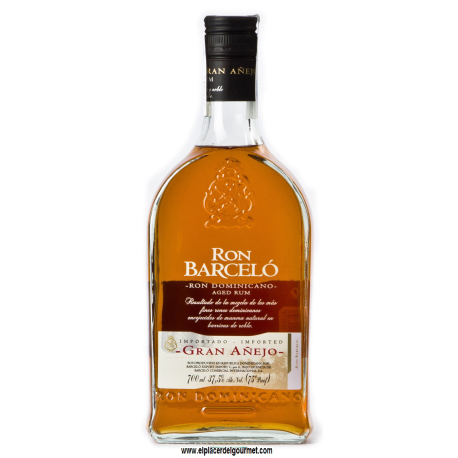 Ron Barcelo Gran Añejo ESPECIAL.Botella of 0,70L. The Barcelo Gran Anejo is a premium rum produced by mixing rum high aging and aged in American oak barrels of first use of bourbon. Tasting notes Ron Barcelo Gran Anejo: The Ron Barcelo Gran Anejo is an attractive light golden amber rum with a pleasant aroma, fine, with hints of candied fruits, candies, raisins and spice aromas like vanilla. Tasty, soft on the palate, with a warm touch, something liqueur with nuances meloso.Bonito final round and bright amber color with orange and red light flashes as candy. - See more at: http://www.vinopremier.com/ron-barcelo-gran-anejo-especial.html#sthash.2Z8a43M2.dpuf

bulky nose with hints of caramel glaze, sweet spices and dried herbs. Smooth and soft, with volume, very tasty, slightly pungent with notes of coffee and snuff with other more subtle but clearly perceived as coconut, long, and very elegant bouquet. Excellent value. May be taken alone or with fresh orange juice. Ron Barcelo history: The January 10, 1929 marked the beginning of a long career for a young Spaniard of 25 years named Julian Barceló. That day started from Mallorca, his native island, to the Dominican Republic, as seía the beginning of the search for new challenges. Once in Santo Domingo, began the great adventure of creating his own firm licorera.Barcelo & Co was founded in 1930. Like all beginnings, these were hard. Julian was with his old Ford van promoting their quality rums all over the country, but with the passage of time, his efforts were rewarded when she saw Barceló & Co converted into power industry nacional.A his death, his nephew Miguel Barceló, led the direction of the company, continuing its growth until it became a mainstay of the economy dominicana.El Ron Barceló in all its varieties, is framed in the purest tradition of the Caribbean, one of the most appreciated rums in the world. Capacity: Bottle of 70 CL Alcohol Ron Barcelo Gran Anejo: 37.5% Vol - See more at: http://www.vinopremier.com/ron-barcelo-gran-anejo-especial.html#sthash.2Z8a43M2.dpuf