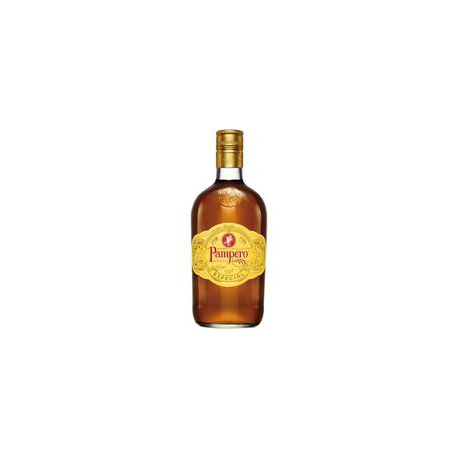 Pampero Ron Añejo 70 CL 40%
Ron Pampero, the first called old, celebrates its 70 years in business. The story began in 1938 Pampero, when visionaries were able to discover in the reeds and native Venezuelan lands, fertile grass to start its work, giving rise to the Pampero House, creator of the first Venezuelan rum from the hand of Alejandro Hernandez and Luis Manuel del Toro.

Pampero was born in an old house in Quinta Crespo in Caracas, founded in May 1938. The beginnings were hard, however, with the passage of time the operations were bearing fruit and 1950, products Pampero House they began to develop in the hacienda La Guadalupe in the Valles del Tuy, where he now is its production.
In the process used craftsmanship, with its formula specially treated oak barrels to ensure the exchange of odors and flavors between wood and rum, and even the latest technology, which results in a taste of bouquet that delights tasters.
At present the company has a presence in 30 countries, including the United States, Chile, Argentina, Mexico, Italy, Spain, France, England, Scotland, Vietnam, Korea, Japan, Australia, Germany, Holland, Belgium, Switzerland, Portugal, Philippines, Singapore, Thailand, Greece, achieving success in the market and being rated the best in the world.
The product range of this company is extensive, beginning with Pampero Gold, presented in a rounded, stylized label bottle, a rum flavor balanced with bouquet and golden color.
Selection 1938 also offers a blend of woodsy flavor and great body, created by Luis Figueroa, the master of Pampero rum maker in commemoration of the foundation of the house.
And also a premium product: Anniversary, icon and symbol of Pampero, awarded Double Gold Medal at the San Francisco Spirit Competition 2007 he received for its organoleptic characteristics, quality and tradition.