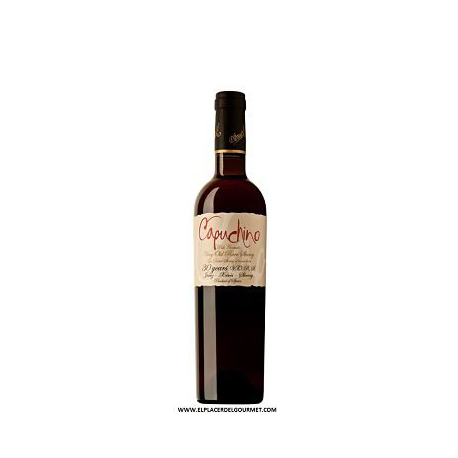 DO. Jerez-Xeres-Sherry WINE PALO CORTADO V.O.R.S. CAPUCHINO 75CL. BODEGA DOMECQ
is a Palo Cortado over 30 years (V.O.R.S.) .. This is extremely fine wines from musts, initially led to 15º and initially identified with a "stick" or oblique line. At the end of the phase sobretabla, the finding by the tasters of the existence of certain very specific characteristics in some of the boots in which he has kept the veil of flower, determine its classification as a potential cut sticks (which is illustrated in boots with a horizontal line that cuts the original "stick"). The wine is once again heads above the 17th and reconduciéndose toward a process of oxidative aging. Only time will determine screeds, after years, if those characteristics noted by the young wine are confirmed over time, resulting in a true palo cortado.