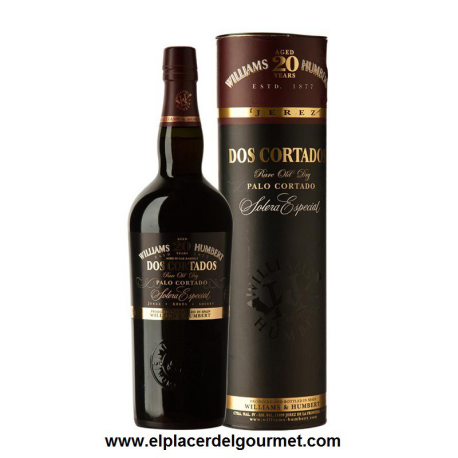 Definition: In EEC, Quality Liquor Wine Produced in a Specific Region, (VLCPRD, CE R1493/99); in Spain, fortified wine with the Quality Demarcation Jerez – Xérès – Sherry and indication of age: VOS (Very Old Sherry), 20 years old. A fortified wine, this rare and peculiar Palo Cortado is halfway between an amontillado and an oloroso.

Production: Bud musts from our best vineyards. Cold, still decanting and fermentation at 22º C. Early filtration, classification by quality and then the must is fortified at 15º with the best distilled wines to obtain the traditional racks. Put into the Criaderas y Soleras system in our fino sherry casks for biological ageing. Sporadically, circumstances cause the contents of some casks to behave differently than is hoped – they will not become fino sherry. These casks are “cut” (hence the term “cortado”) with one or two jugs of alcohol to form the base of the palo cortado solera system. The wine is then aged for 20 years until it reaches the solera.

Tasting notes: Bright hues of very old gold and amber. Pungent, intense and complex on the nose, with a subtle note of filberts and dried fruits. Dry, with excellent acidity; a long, full-bodied and elegant palate. An incredibly expressive and unforgettable finish. Sherry with an amontillado nose and an oloroso palate.

Suggestions for consumption: Excellent as an aperitif for those long evenings or in short drinks.